Only fitting that a series focused on abundance should start with presents! At Peace Awareness Labyrinth & Gardens on June 18th, MSIA President Paul Kaye opened up the workshop Trusting in God & Making a Budget by offering free books.

The universe is abundant. Just because you’re reading this YOU get the same gifts! Simply head to msia.org/shop for your copies of the books God is Your Partner and Living the Spiritual Principles of Abundance and Prosperity, Volumes 1, 2 AND 3!

Perhaps intuiting that the “b” word is fraught with emotion (for some of us), Paul also encouraged the crowd to start simply. If even one new key gleaned from Trusting in God & Making a Budget is used, the upping-the-abundance- factor is in play!

Next, the lovely and super smart, Ashley Whitaker took the stage. (Minutes later her dashing husband David was at her side assisting with white board writing duty and fielding questions.) Some of us squirmed in our seats upon hearing Ashley utter the word “budget.” However, her generous compassion made the whole notion of budgeting somewhat palatable. Zero Based Budgeting is Ashley’s recommendation.The notion is that every dollar earned is allocated and separated into categories.

Ashley and her husband, David make monthly trips to the ATM. For some categories, like groceries, they divide their funds into envelopes. Monies left over in any given month can then flow over into another month. Yes, savings can also be one of the categories. They both swear that the practice of budgeting allows freedom. Instead of second-guessing, they are crystal clear. It’s in the cash envelope or not.

Both Whitakers are big fans of tithing. The practice of contributing 10 percent of one’s income to one’s spiritual source of sustenance is ancient. You can read more about the origins of tithing here. On the fence about tithing? Read on.

“Tithing is a spiritual law.
You give of the first fruits; you give first to God in thanks for all that comes to you.
When you do this without seeking any return, but openly in gratitude for what you have received, you keep yourself under God’s law, or grace, rather than the law of the negative realms.
It is one way of keeping your eyes on the Lord.”
– John-Roger, DSS

Anticipating the “what if” questions, the ninja of no-nonsense finances (aka Ashley Whitaker) declared that even if income is irregular or erratic, you can still create a budget based on past (and/or probable) income. No one said this was easy. In fact, David confirmed that it was hard at first.

Ashley is a staunch believer in practical spirituality. She kindly gifted us with the St. Augustine quote at the top of the article. (“Pray as though everything depended on God. Work as though everything depended on you.” – St. Augustine) Ashley also gently pointed to research that reveals that odds for winning the lottery are 1 in 3 million. Warmly, she adds, “Budgeting allows you to invest in your dreams.”

Sooo, it makes sense to start budgeting. Right? For those who are app happy, Ashley suggests trying Every Dollar but personally prefers a spreadsheet.

Second up was Nick Segal. In addition to his enormous success in the real estate market, along with his wife Laura he’s written On Your Terms. The full title is On Your Terms: Discovering a More Joyful and Purpose-Filled Life through Value Conscious Negotiating. It sums up Nick’s presentation. 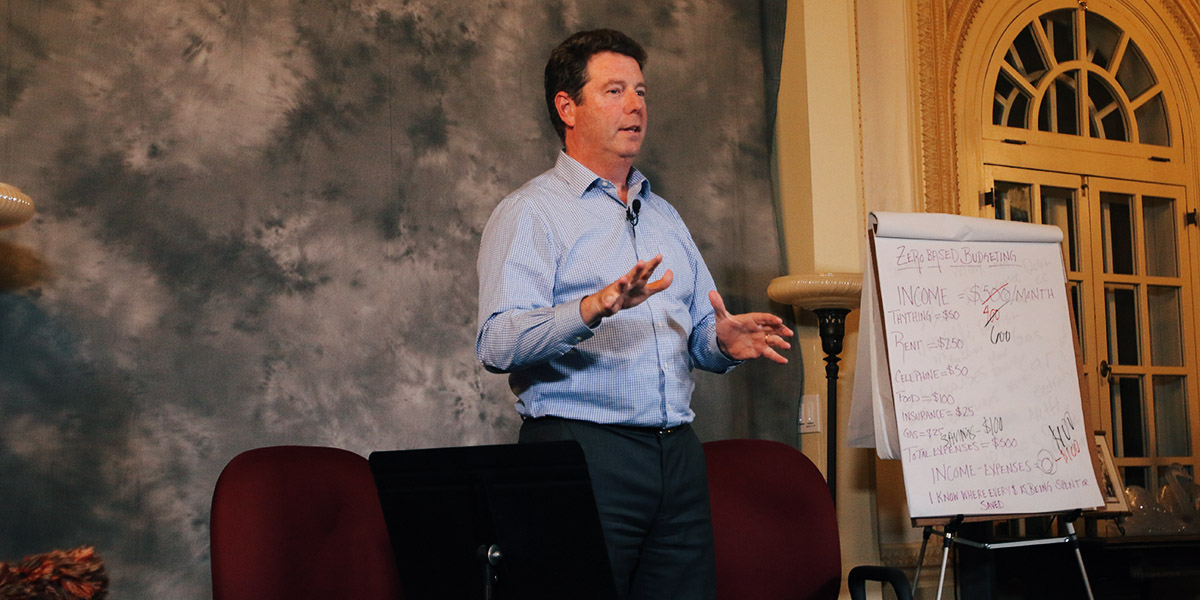 Nick gets big laughs for calling the percentage on credit cards “mobster money.” He then adroitly maneuvers the audience to examine deep questions. “Budget has constriction written all over it. We look at the freedom and benefit that comes from budgeting.”

Nick says budgeting is a form of discernment. Google the word. Most online dictionaries agree with Google’s first definition, “the ability to judge well.”

The second mind-blowing meaning of discernment: “In the Christian context, perception in the absence of judgment with a view to obtaining spiritual guidance and understanding.”

Nick points out that, “You speak your truth in how you spend your money and time.”

Gulp. In other words, money is a mirror of sorts. And may point out where one is exemplifying discernment or something else.

Nick points out that “Fiscal freedom starts with why you want it. You will be challenged. The more you know your why, the easier it is to get on track.”

If you missed the Abundance series this time with stars like Nick Segal and Ashley Whitaker… Well, the Pathways to Greater Abundance series begins July 23rd at Peace Awareness Labyrinth & Gardens in the majestic mansion at 3500 West Adams Boulevard in LA.

Visit PeaceLabyrinth.org/events for Pathways to Greater Abundance tickets. While you wait for the sure-to-be-brilliant series to begin; you could watch the recording on our Facebook Page, and start trusting in God and making a budget.