After months of development, we recently released an updated version of the iOS MSIA App for iPhones and iPads. There are some wonderful features to check out. By tapping the “More” icon on the far right of the lower menu bar, three new options appear — the MSIA Light List, the Practical Spirituality playlist from the MSIAorg YouTube channel, and a way to easily share the MSIA App with others by text, email, Twitter, and more.

When you click on “more” on the lower righthand corner now you can: 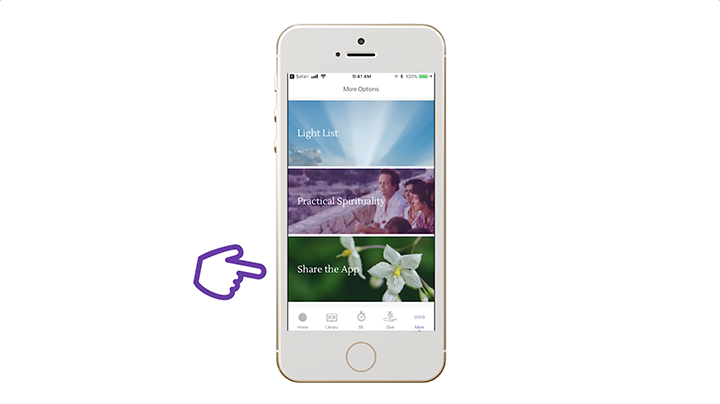 Users have been asking for the MSIA Light List since the MSIA App was first introduced, so it is great to finally make it available complete with a dynamic animation to symbolize the Light being sent.

Another update is that the App now works in Airplane mode, so when you are flying or offline, you can still listen to downloaded SAT seminars or use the SE Timer. And while it may not apply to everyone, the App now syncs between multiple devices if you have both an iPhone and iPad.

We have also expanded the Help sections for some of the features. The help icon can be found in the upper right corner as a circle with an “i” in the center. If you have questions or problems with a feature, the help section may have your answer.

The other functions work the same as before. Anyone who ever purchased Year 1 physical English Discourses will automatically have the digital version in their App at no additional charge.

We get asked a lot when the Android version will be released. Now that we have this major update to the iOS version, we will be exploring the development of an Android edition. Stay tuned for more information.

You still haven’t downloaded the App? Click here to get started!